CyberCecure: Ensure that your browser shows our verified URL.

Davis has long been the industry leader in personal weather stations. However, it has'rested on its laurels' in recent years, allowing competitors to catch up and surpass Davis in almost every element except precision.

That is not enough. With more and more people turning to smart home technology, most consumers want to do more than just check the weather. They'd like their sprinkler systems to turn off automatically when it rains. They want their lights to switch on when it is cloudy or dark outside. Until now, the Davis platform was incapable of accomplishing this.

Enter the WeatherLink Live service. Davis Instrument is making its first foray into modern connection. While WeatherLink Live does not yet allow full smart home integration, the platform is designed to do so in the future. Is it, however, worth the hefty price tag?

Davis needs WeatherLink Live, but we wish they had integrated the device's features into a fresh new and sophisticated desktop console. Even if it's only Alexa, it provides Davis owners with the essential smart home connectivity to future-proof their stations (for now).
⭐⭐⭐⭐✰ 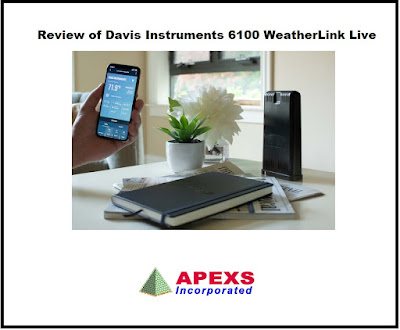 The Console is No Longer the Center of Attention

The first thing you'll notice about WeatherLink Live is that it's simple. At first appearance, it seems to be nothing more than a 9-inch-tall rectangular piece of plastic with a power wire. However, appearances can be deceiving. Inside the plastic shell lies a slew of modern technology that ushers Davis into the twenty-first century.
WeatherLink Live is Wi-Fi compatible (2.4GHz only), allowing you to connect your weather station directly to the internet rather than using the old and out-of-date console dongle. There are advantages to using it. The new WeatherLink app updates status in real-time, at 2.5-second intervals.
In theory, you may go without the console because you'll be able to monitor conditions through the app. You can additionally connect up to eight additional weather stations or sensor transmitters to a single WeatherLink Live.

The setup is simple, but we lost data (Kind of)

I liked how simple it was to set this up. Because much of the setup is done through the app, it took me less than five minutes to get it up and running. Install four AA batteries to power the gadget and keep it collecting data in the event of a power outage. You'll also need to give your station a name, select it, and connect it to your WeatherLink Live.
The process was almost faultless. When we got our station up and running, we noticed that three years of data had vanished. This is the main problem with WeatherLink Live. If you previously used the Davis dongle to connect your station to the internet, you'll have to start over.
Unless you've been using the PC software the entire time, there is a mechanism to import data from the WeatherLink servers, but it only downloads data back to the time you moved your station to the WeatherLink 2.0 platform (for most of us that happened this past spring). All of your past year's data is inaccessible, despite being available from the station you first set up. WeatherLink Live generates a new station, which is inconvenient.
It's a letdown, and we're hesitant to suggest it to current Davis station owners. Some of us may have years' worth of data to import. We've maintained both the WeatherLink live station and the station connected to our console dongle running for the time being so we can continue to access the data.
We'd be extremely grateful if Davis could give us with a mechanism to import that data.
These issues do not effect new station owners, though, because you will not have any historical data to worry about (at least from a Davis station). For these people, we strongly advise that you begin with a WeatherLink Live in your setup. It's worthwhile.

The real-time updating is fantastic.

I enjoy real-time updates. We were able to monitor new data coming in as it was measured during wind and rainstorms. Every 2.5 seconds, wind speed and direction are updated, and every 10 seconds, rainfall is updated. The live updating is far more convenient than having to exit the station data page in the app and re-enter to see new data.
It's as near to a console experience as you can get on a mobile phone, and it's more current than the outdated Davis display consoles. While new display consoles are allegedly on the way, this will suffice for the time being. 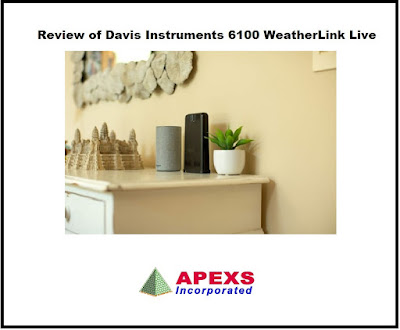 There is Smart Home Support, although it is limited.

The only smart home compatibility available right now is for Alexa via the WeatherLink skill. The skill is effective, and it will read out your conditions for you. But, for the time being, that's all there is to it. What we'd want to see next is Google Assistant compatibility, as well as smart home platforms like IFTTT, so that we can use this data to control other smart home devices.
The good news is that the WeatherLink Live platform is already set up to allow for this, so it's only a matter of time before Davis adds it.

What We Really Liked

We like almost everything about WeatherLink Live. It solves many of the issues that the old Davis connectivity methods had. The app's live updating is among the fastest we've seen, and the Alexa integration works nicely.

The requirement to create a totally new station for WeatherLink Live stinks. It disconnects you from a lot of your data, especially if you've had your Davis station for a long time and haven't used the bulky software. There has to be a method to combine this data without requiring a totally new station. Once more, only former station owners are impacted.

Are There Better Alternatives?

While other technologies may provide better smart home connectivity at a lesser cost, very few can match Davis' precision. And the dongle technique isn't any cheaper and will most certainly be phased out with time.

Should You Buy It?

The WeatherLink Live is an expensive standalone product, but it's a far better value as part of the bundles Davis now offers. While it will still cost you money, you will be obtaining the required new technologies to future-proof your station. If you're looking to buy a new station, we highly recommend it. Long-time Davis owners, on the other hand, may prefer to wait until Davis resolves some of the previous data migration concerns.